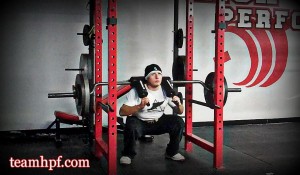 For those of you who did not know, for the last 10 weeks I have been interning at High Performance Fitness shadowing (assignment from my school, Robert Morris University) Mike while he trains his clients. This experience was truly a learning one, because I learned that it is really more than just training someone. It is more than just “counting sets and reps”, being someone’s trainer is building a trust between you and that person. It’s all about teaching someone how to become not only physically strong, but mentally as well. By mentally strong I mean that as a trainer you make your client confident not only in the gym but outside the gym as well, for example the workplace environment. It’s about knowing how to motivate someone, not by being their biggest cheerleader, but by letting them know exactly how to do something, and letting them know that they can do anything that they work hard for.

The first 5 weeks of interning consisted of watching Mike do what he does best, train his clients. At first I was a bit nervous because I had no idea what to really expect. I know that we train people, but what was I going to be doing? My job at first was to be a spotter and to give people “cues” while they were lifting. Being the first couple of weeks, and not knowing really how to give those cues to people I was nervous as how to start or even what to say. I know the cues, but when do I say them or shout those cues? Along with this, one of the biggest factors for me was being loud. I was not comfortable yet around the people I was training because I barely knew them, I had seen their faces but did not know them. As the weeks passed by I began to become more comfortable with the people I was training, and not only that but I was beginning to feel the trust between the client’s and myself.

After the first 5 weeks on interning it was my turn to lead the training sessions. My first thought was, “okay, I’m going to tell people what numbers to do, and what exercises to do.” I didn’t think much about the little things. For example, being loud, or enthusiastic, telling people what it is they could do more of, and oh this is just for the main lift. When it came to accessories at this point I literally felt like I was drowning because I had not found my voice, nor did I know how to set anything up or delegate to others. If I had to describe my first training session I would say it was probably the biggest mess I had ever seen, and that is an understatement. I knew that from this point I either had to sink or swim. It lit a fire under my ass and I decided to swim. As the training sessions progressed on that night, I began to do things that I hadn’t been doing in the earlier session. I was louder. I had more of an idea of how to delegate and I was beginning to find my voice.

As the weeks flew by I was trying to make every training session that I ran to be better than the next. I took whatever critique I got (from Mike and my trainees) and used it to my advantage. I was more enthusiastic and I began to learn how to better motivate people and also how every person is different.

Every person is motivated differently, and I learned that not every person likes to be “shouted” at. I learned this especially with the woman clients that we had. It’s a whole different ball game with these clients, because the extrinsic motivation comes from the trainer, and being their trainer you’ll need to know how to trigger it. One of the motivating factors that I picked up on is positive reinforcement and also being hands on. Letting your client know that they are doing awesome and that they are improving and getting stronger. Being hands on is where that trust I was talking about earlier comes into play. Depending on the trust level of you and your client you will know whether or not you can be hands on. For me, it wasn’t until about week 6 or 7 that I began to become really confident in what I was doing. I was also becoming more of a teacher. I began to explain the lifts more, as well as the accessories and why we are doing them, and how they affect the main lift.

The last two weeks of interning I go the privilege to train with our first session of the night and that is the athletes. I felt more nervous than anything training with them because I needed to not only talk the talk, but also walk it. I needed to show them that not only can I teach something but that I can also do it as well.